Awards ceremony: The French Institute of Cyprus and the French Embassy will award prizes to the winners in the "Battles" and "Choreography" categories.

The first prize « Battles » will be awarded on January 29 by the French Institute of Cyprus.

The first prize « Choreography » will be awarded on January 30 by the Embassador of France at Latsia Municipal Theater. 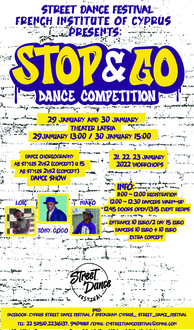