"Cultural and architectural Heritage of the European Union". PFUE event, in collaboration with EUNIC. The exhition which opening took place on Sunday May 8, continues until June 6 in Paphos (Multifunctional Coastal Park – Molos).

The exhibition will be displayed in Pafos from May 12 to June 6, in Nicosia from June 7 to June 26 and in Larnaka from June 27 to July10. 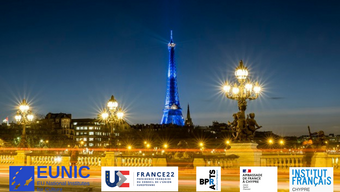 The 20 photographs from 18 countries of the European Union on display illustrate this wandering through time between natural or ancient heritage and modern constructions, witnesses of our time in the making. The architecture marks it with its imprint.

Men and their concerns are at the heart of the architectural approach: architecture, however grandiose it may be, always responds to both an aesthetic desire and a practical need. Through the techniques it uses and the social and cultural characteristics, architecture visibly manifests its era.

The works-monuments in question here are links between people, between times, between the arts. They contribute to give meaning to the construction of a European whole.

This immense wealth, although seeming to cross the centuries, is also fragile. It is faced with the issues and threats of today as it will be with the challenges of tomorrow. Europe has had a turbulent history, but it has been able to protect a large part of its heritage which still amazes us today. However, the current situation in Ukraine is the most painful evidence that cultural heritage is not a given but can be the victim of the destructive madness of men.

This is why the preservation of heritage in the face of dangers, whatever they may be, is essential. Since January 1, and until the end of June, the French Presidency of the Council of the European Union has been carrying out a fundamental reflection on the protection of our European culture and its diversity.

Efforts to digitize our heritage or the reinforced work to combat the illicit trafficking of cultural property are all means of protecting and enhancing our common cultural space. Because, as André Malraux said in 1961, more than “places of beauty that we must transmit as they have been transmitted to us”, this heritage is also “the soul [of a] great dream”. Here, it is not only the dream of mankind, but the one of Europe.

We would like to thank the European embassies and the Cypriot institutions which took part in this exhibition, as well as the municipalities which participated in it, without forgetting our partner BPR Arts, and in particular, Catherine Nikita who carried out this project