In order to make the payment of the French classes easier and in order to limit contacts, the French Institute strongly encourages users to pay the amounts due using JCC: https://www.jccsmart.com/e-bill/34609024.

Opening hours to the public

The Safe Pass is compulsory for students over 12 years old who take lessons at the Institute.

The Exams Office is at your service for information and enrolment at:

The Campus France Office is at your service for information and enrolment at:

The French Institute of Cyprus, partner of the "Heat the Beat 2021" event organized by the Rebel Dancers School, has the pleasure to invite you to an exceptional evening on Saturday July 31 at 6.30 p.m. at the Municipal Amphitheater Idalio. The jury, made up of several professional French and Cypriot dancers trained in France, will assess the performances of Locking, Hip Hop and Breakdance dancers.

Rebel Dancers Academy, one of the few Dancing schools in Cyprus that focuses on Street Dancing such as Hip-Hop, Breakdance, Locking and Popping, has been working closely with the French Institute of Cyprus for more than 15 years. Some students of the Rebel Dancers Academy study and some of them live and work in Paris while some of the teachers are nowadays teaching in different dancing schools abroad, specifically in France and Greece.

The Rebel Dancers through all these years have been collaborating with famous French Street Dance dancers such as Gemini who is considered to be one of the best Lockers in the world, Plock, Yaman, who has been working as Madonna’s choreographer since 2008, and his nine members team «ProPhenomen», but also Benji, Mounnir, Gonzy, Raza and Loic. 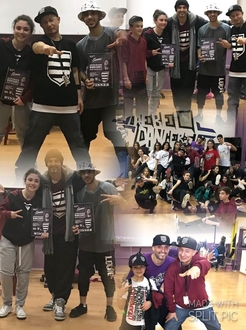 Maetro with Gemini and Rebel dancers

The dancing group “The Rebel Dancers” whose main characteristics are ingenuity and originality started its activities in Cyprus in 1991. Its goal is to offer the chance to every student to be taught by the best dancers in the field. The Rebel Dancers are well known for their shows, every year they give a show at Skali Aglantzias in front of an audience of thousands of people, as well as for appearing on television programs, adverts etc.

The Rebel Dancers group is also well-known for its involvement in subjects such as the fight against AIDS, Drugs and help for children with special needs.

Maestro (Director) has connected his name with so many different competitions in Cyprus, not only as a choreographer but also as a judge, and as a highlight he was part of the first Cypriot television talent show of MEGA channel, «GET ON STAGE» in 2009, in which he was participating as a choreographer. He is also getting many proposals from different dancing schools from all around Cyprus and Greece in which he gives Locking seminars to students and even professional dancers.

Many of the Rebel Dancers’ students and teachers were distinguished in competitions not only in Cyprus but also abroad.*

The fact that the Rebel Dancers Group has develop collaborations and maintains perfect relationships with so many distinguished dancers, proves the high level of the school and the perfect condition of the teachers.

Upstream of this show, 27 workshops from intermediate to advanced level will be held from July 5 to 30 and master classes from July 26 to 30.

*LMC Lockers (Locking crew) won the first place on the television talent show “GET ON STAGE” in 2009. They also competed in the worldwide Street Dance competition, “JUSTE DEBOUT”, an international hip-hop dance meeting whose final has been held in Paris since 2002, as well as in the worldwide competition “THE ONE” that took place in the summer of 2011 in Los Angeles.

They won the international competition UK B-Boy Championships in the Locking Category in 2016.

Liquid Fire (breakdance crew) won the first place three times in a row (2007, 2008, 2009) in the Dancing competition “BOTY Cyprus Preliminaries” (Battle of the Year) and they got promoted to compete in the “BOTY Balkans” where they managed to get in the final 4. In September of 2010 the members competed in various battles in one of the biggest Breakdance Events worldwide «The Notorious IBE» (International Breakdance Event) that took place in the Netherlands, where they also managed to get remarkable places.

Celebrity crew, another Rebel Dancers team, won the Hip Hop international competition twice in a row in the years 2012 and 2013.
Rebel Dancers Junior took the second place in the same competition, Hip Hop International, in the younger category for children 7-12 years old, in 2012. Et.

In May of 2018 the STOP&LOCK crew won the European competition UDO STREET DANCE CHAMPIONSHIPS.