The “Night of Ideas”, an annual event dedicated to the free flow of ideas and knowledge, is scheduled for January 28, 2021. In view of the Coronavirus epidemic, this event will take place behind closed doors and broadcast on social networks. Discover the programme on The Night of Ideas.

In Cyprus : "Closing the distance: poetry, solidarity and contagion". Thursday January 28, 2021 - Meet us on our Facebook page

This event, which takes place in the wake of the health crisis by asking “the question of our individual and collective relationships with space”, which “invites us to think about the new solidarities that the economic and social crisis calls us to build” will present an in live performance by Anthi Pafiou and Mathieu Devavry (InnerSpace) of a mural representing the portrait of Albert Camus. This pictorial performance will be accompanied by a reading of extracts from La Peste, L’Homme revolté, Jonas or the artist at work and L’Enfant grec. Greek poems by Daphne Nikita (French translation by Christos Dubart) are the subject of a video by visual artist Yiorgos Taxiarchopoulos and those written by Fortino Samano (French translation by Marine Meunier) are the subject of a video by Spyros Christofi and Mathieu Devavry.

The French Institute of Cyprus has chosen to highlight the thought of Albert Camus, who better than anyone else has combined the themes of absurdity and loneliness, revolt and solidarity in all his work. To the Cartesian “I think therefore I am” he opposes a “we revolt therefore we are”. Many have read or reread La Peste (The Plague) during the various lockdowns which affected the psychology of individuals as much as the Covid-19 their health. The Plague shows well all the ambiguity of a plague which, although real, distils an evil far more insidious than it reaches the souls of men. 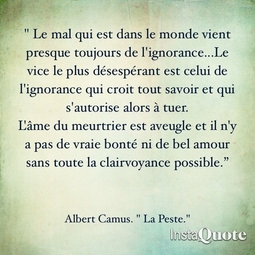 Fear, mistrust, denunciation, renunciation, loneliness and absurdity are evils more pernicious than the diseases which affect the body of individuals: they are evils which plague the social body. To these scourges more important than the disease which causes them, Albert Camus opposes the moral and humanist values ​​of courage, resistance, combat, revolt, solidarity and fraternity. Close and distant, alone and united: the other man is the foreigner, the radically other, but he is also my brother, my neighbor. In the last work published during his lifetime, Exile and the Kingdom Albert Camus described in the short story "Jonas" the anguished search of a painter in his studio that lets a single canvas "entirely white, in the center of which Jonas had only written, in very small characters, a word that one could decipher, but couldn't say if it was written solitaire (solitary) or solidaire (solidarity) ”. Albert Camus wrote in The Rebel: "What is a man in revolt? A man who says no. But if he refuses, he does not give up: he is also a man who says yes, from his first movement ”.

This is why in these times of pandemic which keep men away through fear, distrust or mistrust, but which also bring them together in resistance, struggle and solidarity, Cypriot and French artists wish to pay tribute to Albert Camus on the occasion of the Night of Ideas, with an event entitled "Closing the distance: poetry, solidarity and contagion," the contagion is also and above all that of resistance and brotherhood.

With the support of the Cultural Foundation of the Hellenic Bank